Stop the Military Operation in Fata

***Please endorse in the comments section***

We, the undersigned, demand an immediate end to the ongoing military operation in the North Waziristan region of the Federally Administered Tribal Areas (FATA). We expect this, the sixth military operation in FATA within the last decade, to follow the pattern set by the previous “decisive” operations which resulted in death and suffering for the people of FATA.

The current operation in North Waziristan is nothing but a sham that will only increase the suffering of the people of FATA. Those declaring “full support” for the military operation choose to ignore history (and the present) at their own peril.

We do not believe that the problem of religious militancy in Pakistan can be addressed through military means nor by an exclusive focus on FATA as a harbor of militancy. Our demands are as follows:

1. An immediate and unconditional halt to the ongoing military operation in NorthWaziristan and other…

Calm, but intense. That was Musadiq Sanwal. Singer, musician, producer, journalist, political activist, writer, director, poet, artist, husband, father and the best of friends, Musadiq was somehow amazing at everything. He was the editor of dawn.com, and transformed the site from the static HTML page that it was to what it is today. He could sing beautifully in an outpouring of love and joy. In his last days, he wrote the wittiest, devastatingly confessional and deeply insightful poetry. In one poem he refers to the cancer that led to his death as a keera, and has a hilarious dialogue with it. It’s actually representative of his relationship with his illness: Musadiq never complained about it, would even joke about it, and avoided company on bad days to avoid a fuss.

He had the ability to push people to achieve their (and some of his own) dreams. Whenever a friend, colleague or loved one would approach him with an idea, he would always be supportive. He would somehow always have invaluable input at the tip of his tongue, which he would present to you in such a way that you never felt that he was talking down at you. Musadiq was a thoughtful, highly expressive conversationalist. He used his whole body as an extension of his voice, informed by his experience in theatre.

Considering he knew so much about our history and culture, one would not expect him to be as technologically savvy as he was. But after all, he did run a website. He even knew geeky things like how to have multiple inboxes in his Gmail, or keeping all his documents in Google Drive. He knew his way around an audio studio, and collaborating with Spider’s own Bilal Brohi, created a wonderful blend of electronic music with him singing Sufi poetry. “Con-fusion”, he called it. You can see the range of his music for yourself if you go to his SoundCloud page (soundcloud.com/dhol-sanwal), there are very traditional songs there with just tabla, harmonium and sometimes a flute, and then there are some purely electronic ones that you could expect to hear in a lounge in New York or Paris.

And yet, if you knew him, it is entirely possible that you may not have known many of his talents, due to his modest nature. Self-effacing, he would always downplay praise from those of us who admired him. I’ve not seen this quality in most performers (and he very much was one), who tend to be egotistical beings. Somehow he was able to find that balance. Soft, but loud. That was Musadiq.

His passing away came as a huge shock to everyone. Even though he had a disease which is often fatal, no one expected that someone so brave, so full of life, could have life taken away from him. What is heartening is how across the board, everyone who knew him, even if they met him once or twice, has only great things to say about him. I know people usually don’t speak badly of the recently deceased, but in Musadiq’s case, it really feels genuine. This is because of the profound effect that he had on the lives that he touched, no matter how subtly he achieved this. Strong, but gentle. That was Musadiq.

Stop all the clocks, cut off the telephone,
Prevent the dog from barking with a juicy bone,
Silence the pianos and with muffled drum
Bring out the coffin, let the mourners come.
Let aeroplanes circle moaning overhead
Scribbling on the sky the message He Is Dead,
Put crepe bows round the white necks of the public doves,
Let the traffic policemen wear black cotton gloves.
He was my North, my South, my East and West,
My working week and my Sunday rest,
My noon, my midnight, my talk, my song;
I thought that love would last for ever: I was wrong.
The stars are not wanted now: put out every one;
Pack up the moon and dismantle the sun;
Pour away the ocean and sweep up the wood.
For nothing now can ever come to any good.
September 15, 2013

Nanga Parbat by moonlight, a photo by nofil naqvi on Flickr. 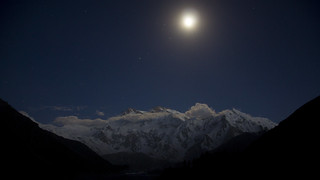